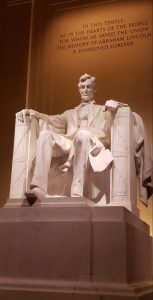 The Lincoln Memorial was built in 1922 in Washington DC honoring the sixteenth president of the United States. It can be found in the western end of the National Mall. The statue pictured to the left is a beauty and can be found in the Lincoln Memorial that is built in the design of a Greek Doric Temple. The statue weighs a whopping 175 short tons and is carved from Georgia white marble. The statue, besides the Memorial itself, is really something to behold. It is said that the statue is supposed to be him in contemplation which brings a lot of life to it and matched with the quote behind the statue it is a very touching to reminder of all he did for our country.