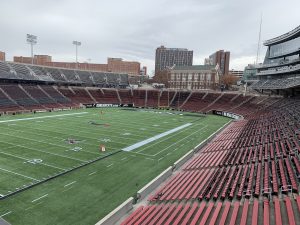 An empty Nippert Stadium resting on a rainy Winter day

Built in 1915, Nippert Stadium stands at the heart of University of Cincinnati. With a capacity of 40,000, Nippert Stadium has broken that number only once before; back in 2015 on its 100th birthday. It has come close in recent times, with a successful 2019 season, Nippert reached just over 39 thousand against nationally ranked UCF.

James Gamble Nippert was a UC football player in the 1923 season, a season which ended in tragedy for the Bearcats. Nippert died of blood poisoning from a wound he acquired on the football field. He received recognition by having it named after him in his honor, only after some of his remaining family members had donated money to complete the stadium.